World Refugee Day is held annually on June 20th to bring awareness to the plight of displaced humans around the globe. It is also a day to commemorate the strength and resilience that refugees display during the hardest of times. It is an opportunity for the world to think about human rights in the face of a global crisis and to protect children from suffering and instability. June 20th is the day, but the time is always ripe for bringing awareness and doing our part to educate about the refugee crisis inappropriate and profound ways. Take on this moment to check out the resources we’ve gathered up.

“Every minute 20 people leave everything behind to escape war, persecution, or terror.” Learn more about the types of forcibly displaced persons (refugee, asylum seeker, stateless, returnee) and the refugee rights that were enacted at the 1951 Refugee Convention. -United Nations

What countries are refugees fleeing? Which countries are hosting the most refugees? What are the global trends by region/country? Check out Figures At a Glance and Refugee Statistics from UNHCR (aka the UN Refugee Agency).

Who is a Refugee? Explore additional animations and resources from UNHCR, including Refugee Rights and Who Helps Refugees? 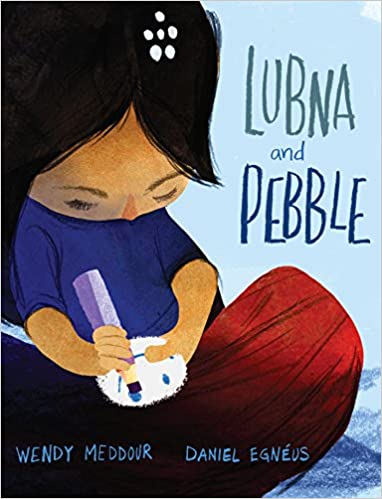 When Lubna is forced to flee her home with her father, she picks up a pebble on the beach to take with her. Lubna draws a smiley face on her pebble, they become best friends. Along with her father, the pebble becomes her source of strength and comfort.

Upon arriving at a refugee camp, Lubna cares for her pebble and creates a special bed for it. One day, a scared and lonely boy named Amir arrives at the camp. They become fast friends as children do. When the time comes for Lubna and her father to leave, Lubna worries that Amir will once again be lonely. She comes to realize that her new friend may need Pebble more than she does.

Stepping Stones is a beautifully written account of one family’s journey to freedom. Before fleeing their war-torn country, Rama, a young Syrian girl, 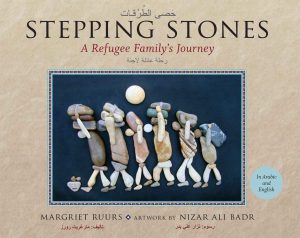 shares the beauty of their home, garden, and peaceful way of life. Rama tells of joyous mornings when the rooster crows to wake them from their sleep. She creates a happy breakfast scene in which mama prepares breakfast with fresh tomatoes from the garden. We can imagine her family’s traditions and daily rituals as she shares the memories of her once peaceful village.

As war and violence spread, Rama and her family are no longer free. No longer able to sing their own songs, pray their own prayers, and dance their own dances. When all their freedoms are gone, they know they must flee. They take only what they can carry on their backs. They walk a long walk, sail in a boat, plant flowers for those lost at sea, and hang onto hope.

When Rama and the others arrive on new land, they are greeted with kindness and love. Their new neighbors’ words are different, but Rama knows that in their hearts they speak the same language. A language of freedom. Rama now knows that once again there will be bright days ahead.

It must be noted that the illustrations in this book tell so much of the story simply on their own. The illustrator is Nizar Ali Badr, a Syrian artist, who creates stone sculptures in his hometown of Latakia, Syria. His place of inspiration is at the foot of Mount Zaphon, where he has collected thousands of pebble stones of various colors and sizes to create his art. The illustrations in Stepping Stones are photographs of Nizar Ali Badr’s interpretation of the story through stone sculpture.